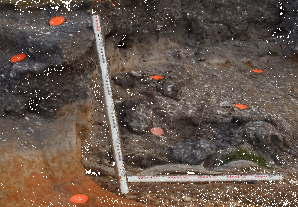 Imagery acquired via UAV can be used to produce dense point clouds using multi-view stereopsis techniques (MVS) combining computer vision and photogrammetry. Steve Harwin’s research examined point clouds produced using MVS techniques applied to UAV and terrestrial photography for detailed change mapping, i.e. using low altitude drone photography for monitoring landform change. The aim of the research was to rigorously assess the accuracy of the UAV-MVS survey technique to better understand the scale of change that can be detected, essentially assessing whether UAV-based image capture provides the spatial and temporal resolution required to map and monitor natural landscapes and in particular whether sub-decimetre (or even sub-centimetre) landform change (in this case coastal erosion) can be monitored. The initial research focused on assessing the accuracy of the generated point clouds once georeferenced. Later research evaluated survey design considerations (camera network design, camera calibration, and ground control density and distribution) through photogrammetric simulation and carefully planned experiments to assess how precisely can we cost effectively survey and monitor landform change.

The first stage of the research evaluated georeferencing results for both terrestrial MVS (T-MVS) and UAV-MVS are compared to field survey points collected with differential GPS and Total Station. The results indicated that a georeferenced point cloud (<1–3 cm point spacing) accurate to 25-40 mm can be obtained from imagery acquired from ~50 m (Harwin et al., 2012 and Harwin et al., 2012). These initial studies highlighted the importance of ground control, camera calibration choices and camera network design in the 3D model generation process and this led to further studies focusing on these questions (Harwin et al., 2015). Point clouds of the terrain derived from imagery collected 2010, 2012 and 2013 provided a means to calculate the landform change at the centimetre level and generate a detailed record of coastal erosion at the site.

A dynamic section of sheltered estuarine coastline in south eastern Tasmania was monitored for fine scale change. The vegetation on the site is grasses and scrub bush along an erosion scarp with salt marsh at the southern end. Initially a section of the erosion scarp was chosen as the focus area for comparing close range terrestrial MVS point cloud to the UAV-MVS point cloud. 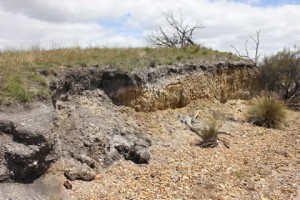 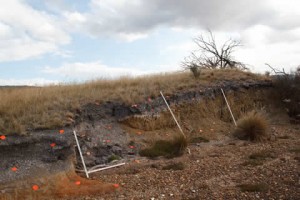 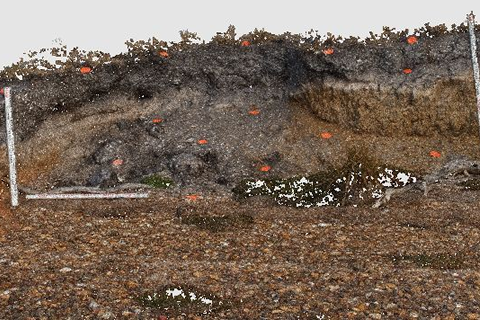 T-MVS point cloud of the erosion scarp in 2012

To undertake a quantitative assessment of the accuracy of the georeferenced UAV-MVS point cloud a number of comparisons were carried out. The orange ground control points (GCPs) were used to perform a helmert transformation between the arbitrary coordinate system of the initial derivation and real world coordinates. The spatial distribution of the GCPs used to derive the Helmert transformation were varied and a number of the GCPs were used to validate the results. The distribution is important, as is the size of the GCPs. With around 20 GCPs evenly distributed 5-10 m apart, an area of 120×30 m was mapped and georeferenced to within 25 mm horizontally and 40 mm vertically. The residuals were assessed visually and the areas of steep terrain showed the largest residuals. In addition, areas with little surface texture were not well captured, and similarly, areas with complex geometry such as grass tussocks and woody scrub were not well mapped. The process fails to penetrate vegetation, but extracts very detailed terrain in unvegetated areas. 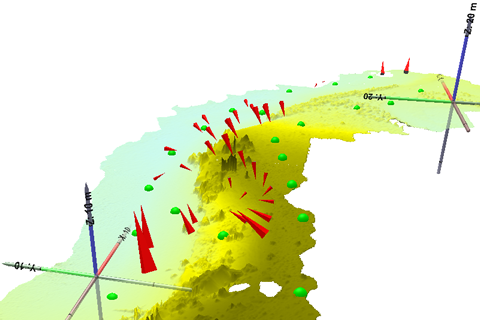 In a subsequent study a qualitative comparison of a UAV-MVS point cloud and a T-MVS point cloud was undertaken to assess how well the point cloud has captured the terrain. A number of profiles were extracted and the two independently georeferenced clouds were compared. 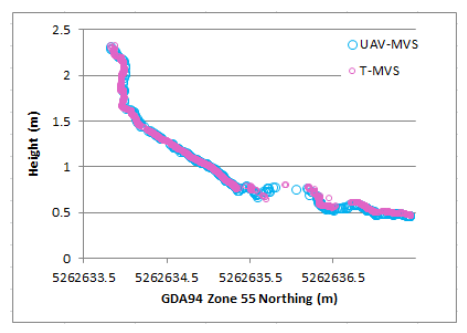 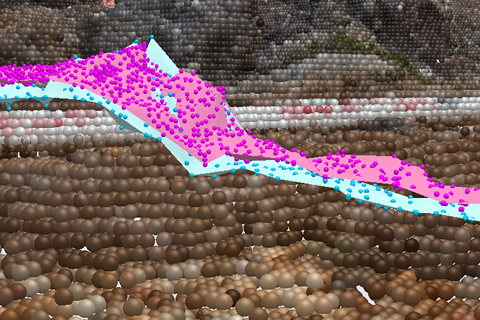 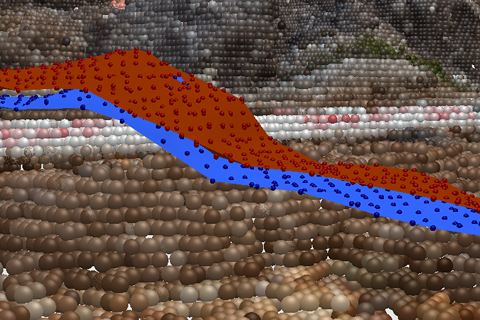 The goal is to map coastal erosion and this requires that the points are coregistered and compared. The Iterative Closest Point (ICP) algorithm was used to coregister the 2010 and 2012 UAV-MVS point clouds to the 2012 T-MVS point cloud and the Hausdorff distance was calculated to obtain a measure of point cloud to point cloud difference.