Satellite, Airborne and Terrestrial Light Detecting and Ranging (LiDAR) technology can provide powerful tools for use in the management of forested environments. Ongoing research into the processing and analysis of LiDAR data has allowed for the measurement and mapping of a vast range of variables including stand level estimates of biomass, canopy cover, and Leaf Area Index (LAI) as well as tree level metrics such as tree height, diameter at breast height and canopy width. These variables are used within forestry management worldwide to predict stock volume and timber value within commercial forests and for ecological purposes such as estimating plant and animal diversity. However, the cost and restricted flying seasons (in some areas) mean that the availability and the timing of airborne LiDAR data capture often do not coincide with key growth stages for silvicultural activities. UAVs offer an alternative cost-effective platform allowing for high resolution data to be collected. This case study investigates the use of UAV-borne LiDAR for the collection of metrics related to forested environments.

Until recently the technology which comprises an Airborne LiDAR system (laser scanner and position and orientation sensors) has been too large to be deployed on mini/micro UAV platforms. The advent of Micro-Electro-Mechanical Systems (MEMS) orientation sensors and small laser scanners, developed for automotive and robotics purposes, has enabled the use of Unmanned Aerial Vehicles (UAV) as a LiDAR platform. UAVs offer a distinctive combination of very high resolution data captured at a significantly lower survey cost. As such, the TerraLuma team has developed a new UAV-borne LiDAR system based on a multi-rotor UAV which will allow some of the prohibitive factors associated with full-scale Airborne LiDAR for forestry management to be overcome. Such a system will further enhance the potential uses of airborne LiDAR in providing on-demand data capture to assess factors such as forest health, defoliation, and rate of canopy closure.

MEMS technology has been deployed for a variety of positioning and orientation tasks, including navigation, obstacle avoidance and land-based mapping. However, due to the high levels of error within MEMS based Inertial Measurement Units (IMUs) it can be shown that estimates of orientation and position would be of an inadequate accuracy for use on-board a UAV-borne LiDAR system. To overcome this technological limitation, an innovative sensor fusion algorithm has been developed which fuses observations of acceleration and rotational rate from the IMU, with observations of position from a dual frequency GPS receiver and orientation derived from still frames taken from an onboard video camera. Accuracy testing has shown that the use of this algorithm allows high density point clouds to be measured with RMSE of 0.32 m horizontally and 0.14 m vertically. For more details see Wallace et al. (2011, 2012) on our publications page. 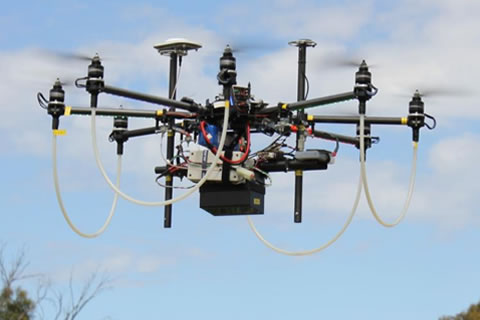 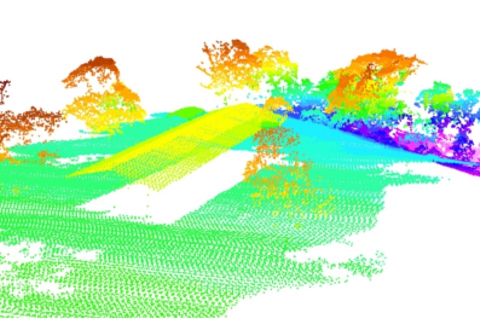 An example point cloud produced in the accuracy testing phase of the LiDAR system.

A case study was developed, which aimed to deliver key forest inventory variables from a 4-year old Eucalyptus globulus stand in Geeveston, Tasmania. At this stage of growth the trees were still relatively small meaning that the ability to distinguish individual trees from full-scale airborne LiDAR data was limited. However, it is important to be able to collect inventory at this stage of growth as canopy closure is likely to occur requiring decisions to be made on the timing of the first pruning lift to ensure the long-term viability of the stand. In comparison to full scale data, the high density point clouds produced by UAV-borne LiDAR allow individual trees to be distinguished more easily and more precise tree level metrics to be derived. The level of detail available in these point clouds should, therefore, allow change to be detected at the tree level. This is was tested by manual pruning of individual trees between successive UAV flights and the development of automated methods to determine if this change could be detected. 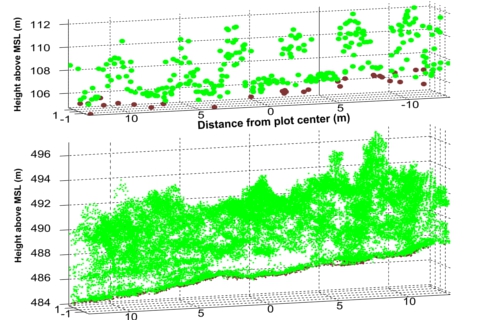 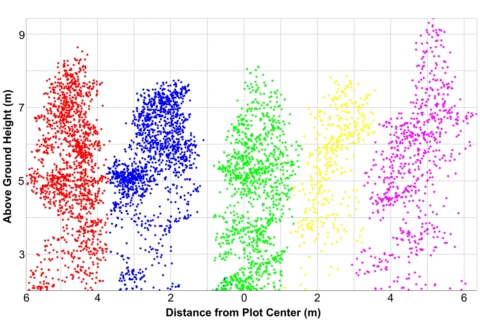 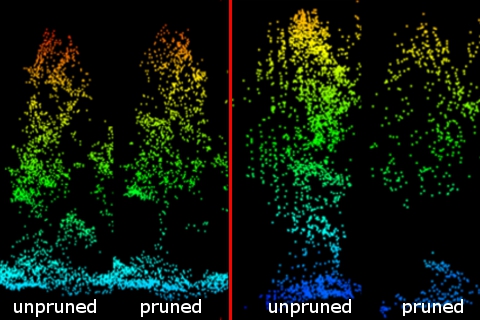 Two trees captured by the UAV-borne LiDAR system before and after pruning, clearly showing the effect of pruning on the lower branches.