A terrestrial photograph of a typical salt marsh.

Salt marsh vegetation occupies the inter-tidal zone in sheltered bays and estuaries. A constant inundation and redistribution of nutrients creates a rich ecosystem that is arguably amongst the most productive in the natural environment. These ecosystems are known for their refuge of endangered species including migratory birds. It is their niche within this inter-tidal zone, however, that leaves salt marsh communities especially vulnerable to projected sea level rise. Predicted water levels would remove periodic flooding, resulting in a permanent inundation that forces salt marsh species to migrate.

A UAS photograph of a typical salt marsh in southeast Tasmania.

Central to understanding the threats faced by salt marshes is reliable spatial data. Spatial data provide an understanding on how and why species are distributed through an ecosystem, and can assist in modelling estimated environmental changes and identifying potential refuges for plant species migrating in response to climate change. A UAS remote sensing platform is capable of both generating the ultra high spatial resolution data for species level mapping, in addition to generating information at a rapid temporal rate to model environmental changes over time. The ultra high spatial resolution UAS data, however, requires more advanced image analysis techniques for processing. 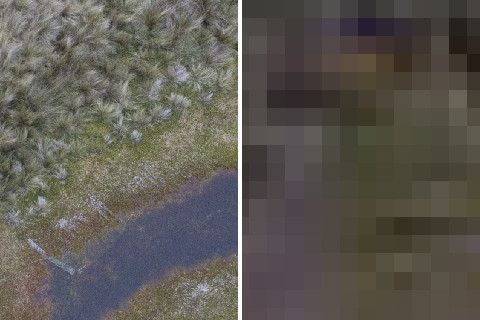 The UAS image on the left is far more detailed (1 cm resolution)than the Quickbird satellite image on the right in which each pixel is approximately 60 cm x 60 cm.

Traditional remote sensing image analysis techniques treat each individual pixel as discrete samples. These discrete samples provide information of surface reflection, both within and outside of the visible spectrum that allow materials to be identified. Where once a single pixel may provide reflectance data generalised over metres or even kilometres, the increased resolving power of ultra high resolution UAS data, typically less than 8 cm, allows the clear delineation of individual components of a ground cover class. To illustrate this point, the spectral response of vegetation may now be more clearly separated into individual components: leaves, wooden branches, and the underlying earth exposed through gaps in the foliage.

In response to this, other components of human visual photo-interpretation need to be considered, and adapted for inclusion within analyses. In addition to colour, human’s interpretation of imagery relies upon a number of additional factors which include shape, texture and contextual information. The task is how to quantify these characteristics to include, and improve, digital image analysis.

The first image is unsegmented, the second is the result of broad segmentation and the third is the fine segmentation result.

Recently, techniques have been developed that incorporate these characteristics in the analysis include geospatial object-based image analysis (GEOBIA) and image texture derivatives. GEOBIA aims to shift the focus away from using discrete pixels, instead focusing on grouping neighbouring pixels into image objects. Image objects can be used to provide additional information about geometric attributes (like size and shape) and well as relationship characteristics with neighbouring objects.

Textural derivatives on the other hand, aim to quantify image texture by measuring local spatial variability. Texture patterns can be measured at different spatial scales by changing the size of the local area the variability is measured over. The importance of texture measures for image analysis is firmly established, giving rise to a multitude of different approaches to quantifying texture.

Despite the growing success of GEOBIA and texture analysis, their application often remains arbitrary. The application of both GEOBIA and texture analysis is highly dependent on both the underlying image data, including its spatial, spectral and radiometric resolution, as well as dependent upon the groundcover classes users are attempting to identify. As such, there is no universal approach applicable in all situations. 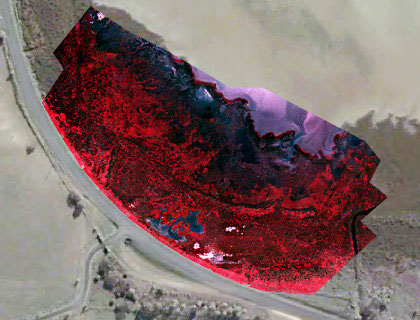 The focus of this study was the use of ultra-high resolution multispectral imagery acquired by UAS of salt marsh communities. This study aimed to develop a machine learning framework to identify relevant GEOBIA and textural characteristics for improved classification of salt marsh vegetation communities. This approach is applicable/transferable to other applications as well.